It has been a long minute since I have reported in to all of you. After our 3 week stint through California and a brief trip to Portugal, We traveled home for a whole 6 days before we once again boarded that big jet airliner. This trip took us to Montreaux, Switzerland for the Montreaux Jazz Festival. I have to admit that I had a few butterflies buzzing around my belly when I heard the news that we were performing. This festival is one of the most prestigious music and art festivals in the world. We had the honor of playing in the newly built Miles Davis Auditorium.

This festival runs for 3 weeks and is spread out over several venues in the downtown district. There are over 100 acts performing each year. Although the fest is labeled as a "Jazz" festival, many genres are represented. I heard everything from funk and soul to Latin. It was a blast walking along Lake Geneva and hearing the sounds of music drifting through the Summer air.
The city was littered with beautiful sculptures everywhere. The art pieces were constructed of every material imaginable. There were also a slew of merchants with booths set up alongside the lake selling everything from funnel cakes to lava lamps. It was like a county fair Swiss style. And lucky for us, there were lots of beer gardens spread throughout the festival area.
The day of our performance, we strolled out to the lake for a quick dip. Donavon and I were the only takers. The water in the lake is as clear as glass and full of wildlife.  Across the lake was a beautiful view of France. It seemed so close that you could skip a rock atop the surface to the border. After our freshwater bath we loaded up the van and took off to the Hall for soundcheck.
The festival production team run a tight ship. Everything was in place and ready for the band to get going. Each band member had a few people around their rigs helping out with any problems with the gear or stage. Quite a far cry from playing the bar/restaraunt scene I am used to at home.  The backline instruments were prestine and in perfect working order. Each band member had a camera man assigned to their station. I had a beautiful white B3 brought over from France for the festival as well as some other great gear. 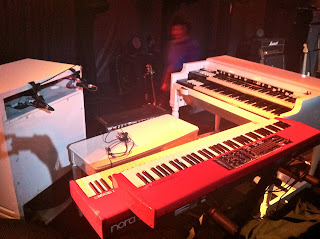 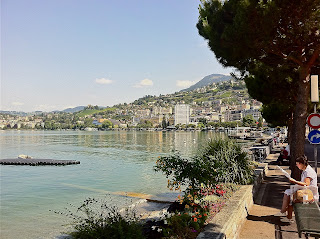 The show was good and the crowd was very responsive.We had a strong showing. The production was awesome from the craziest light show to the jumbotrons on both sides of the stage. The whole experience was a blast. After the show we headed back to the Hotel and sat on the balcony and absorbed the post show high as well as a few tasty beverages. The next morning we were whisped back to Geneva and on to the next leg down the East Coast of the states.
Posted by senseless info at 10:57 AM