It has been too long

Well,  it has been quite some time since my last post. I have decided to revive this stream of useless babbling. There has been a lot of changes since my last post. I have traveled to Brazil and New Zealand with the Frankenreiter extravaganza. On September 14th last year our son Harry came into the world and obviously our lives were changed forever. I'm sure many of you reading this have experienced this and understand what a crazy roller coaster ride childbirth entails. I have never been so stressed and happy at the same time. Since February, I have been home here in North Florida hanging with the family enjoying watching little Harry grow like a weed. He is truly a blessing to Cat and myself minus the poopy diapers and sleepless nights.
On the music side of things,  I have been extremely busy playing , recording and torturing young musicians with my useless musical knowledge. It has been a nice change to be able to stay in one place and not live out of a suitcase for a minute. With that being said, I have been itching to get back out on the road and bring some music to the peeps.
In June I had the privilege of doing a few shows with the amazing Walter Parks and his band Swamp Cabbage. This band is a group of musical all stars. Walter has been a long standing member of the legendary Woodstock artist Richie Havens Band. Walter not only played guitar and arranged Richie's music but also kept the show afloat behind the scenes tour managing their every step. Jim Devito chimes in on bass. Jimmy also a native of North Florida has recorded and produced artists such as Tom Petty, Don Henly, Creed, Mofro, Donavon, the list goes on and on. Jimmy is an accomplished bass player as well as a proficient guitar slinger. Rounding out the trio is Jagoda on the buckets. Jagoda is a native of New York. We do forgive him of his "Yankee-ness."  He has played and recorded with a long list of great artists. Jagoda just completed a record with  producer T-Bone Burnett.  I felt as if I was not worthy of being in such a grown up band with likes of these fellas.

After a grueling drive in a very small rental car loaded with too much vintage gear topping out at 65 MPH and  listening to Jim snore, we made it North Carolina Our first show was at the famous Garage Bar in Winston Salem.  Walter had a film crew come out to shoot some video in hopes of releasing a DVD in the near future. We had a grand old time. There is so much history in this town. I never realized how much big tobacco has influenced that area. Our show went very well and was well received by the audience. I felt that I got myself a good kick in the ass by a great trio of musicians.
If you get a chance check out Walter and The Swamp Cabbage. Here's the link www.swampcabbage.com. 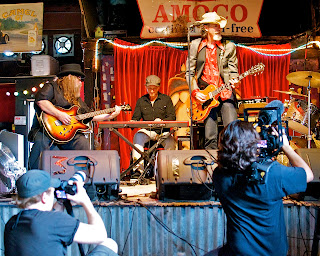 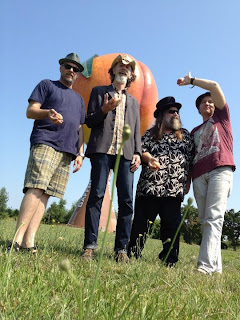 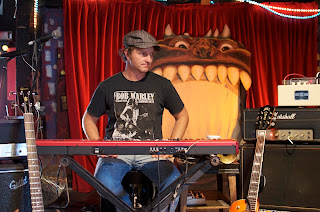 Posted by senseless info at 9:24 AM